Another week, another rally – the Aussie follows stocks and also had its own domestic reasons to rise. The focus shifts from Australian data to the Fed decision and also back to relations with China – both with the US and also with the land down under.

The Australian economy is headed into an official recession for the first time since the early 1990s – but that is no surprise given COIVD-19 and at least in the first quarter, the contraction was minor. Gross Domestic Product squeezed by 0.3% better than had been expected.

Alongside an upgrade to retail sales figures and a high trade surplus, the Aussie had reasons to rise. Upbeat Chinese Purchasing Managers’ Indexes figures – including growth reflected in the beaten services sector – added to the rally.

The Reserve Bank of Australia left its interest rates unchanged at 0.25% as expected, and seemed to express more optimism about the economy. That also supported the A$.

The Aussie also continued benefiting from the ongoing advance of US stocks. Protests against racial discrimination that rocked America may be a turning point in political history but have had little effect on markets so far.

Australia and the US continued reopening their economies at the state level. While the land down under has hardly recorded any cases, statistics in America are on the rise once again, causing only minor attention.

Investors also shrugged off tensions between the world’s largest economies. China’s glee over demonstrations in America and Washington’s ban on Chinese airlines to fly into the US went almost unnoticed. Beijing was quick to deny it had reduced buying of soybeans. Markets seem to worry only about the trade deal.

The Non-Farm Payrolls were even better, with the US gaining over 2.5 million jobs and the unemployment rate falling to 13.3%. That allowed the dollar to recover.

The Federal Reserve tweaked its lending schemes, reminding investors of the main driver of the recovery in equities. Its support will be tested again shortly.

The row between Australia and China, its largest trading partner, has faded from the headlines but has not been resolved. Canberra is upset with Beijing’s seize of powers in Hong Kong and also of managing the coronavirus pandemic. As long as trade flows, rhetoric may only cause small jitters.

Sino-American relations may return to the fore and could impact the Aussie by triggering a fall in stocks, consequently sending flows away from the A$ – a risk currency. Both countries remain at odds over technology and COVID-19. Taiwan may also enter the mix. Beijing ominously called for a “peaceful reunification” with the island nation.

Chinese trade figures for May are projected to show a decrease in both exports and imports after a surprising rise in outgoing shipments was recorded in April. Rising orders in China imply more Australian exports.

Producer prices in the world’s second-largest economy are of interest as they are correlated with growth. An ongoing slump is on the cards. Consumer prices are skewed to the upside by a surge in pork prices.

Westpac’s gauge of consumer confidence may rise in June as Australians return to normal. Home loan figures for April are also of interest.

Here are the most prominent Australian and Chinese releases on the economic calendar:

Europe set to open higher, as Asia markets build on US gains 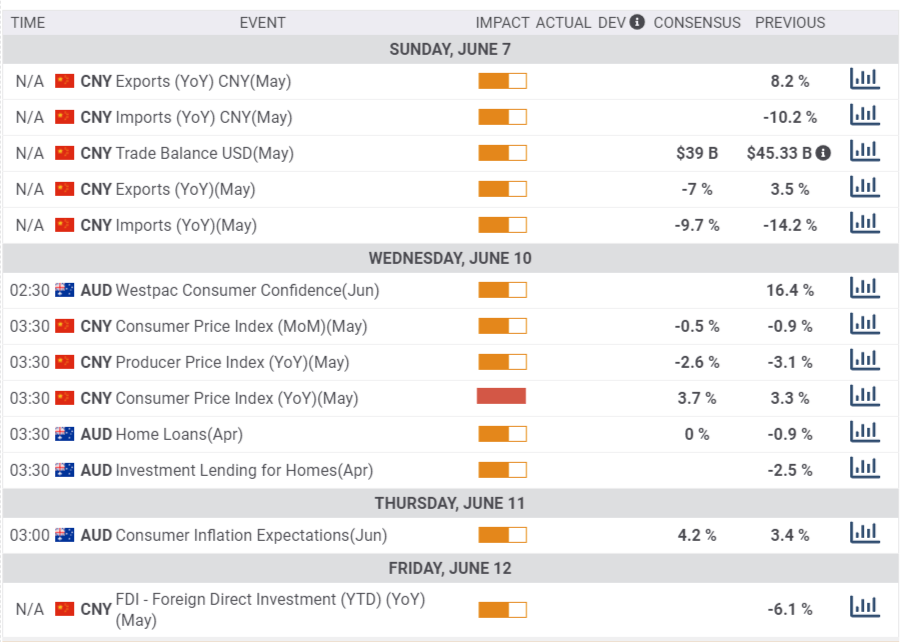 Is the US economy reopening too quickly? That question may move from the back burner to the forefront as time passes by. Health concerns may send stocks lower and boost the safe-haven dollar.

If massive protests resume, that would not also increase the risk of infection but could also worry investors. The elections are only in November, but if Democrats begin having a chance to take a clean sweep of the House, Senate, and the White House, markets may fear regulation. That is still a remote prospect.

US inflation is set to remain low, yet stable. The Core Consumer Price Index will likely significantly below 2%, the Federal Reserve’s target.

Jerome Powell, Chairman of the Federal Reserve, will like leave interest rates unchanged and also continue ruling out setting negative borrowing costs, a one-time desire of markets. However, the Fed may introduce new lending or bond-buying schemes, reflecting ongoing support. Any considerable change to the already massive stimulus may further boost markets.

The world’s most powerful central bank also publishes forecasts for growth, inflation, employment, and rates. These dot plots used to hint about future changes to borrowing costs, but the focus may be on how the Fed sees the economy moving forward. A gloomy outlook such as full recovery only in 2022 may weigh on markets while one that foresees full recovery in 2021 may cheer investors.

The University of Michigan’s Consumer Sentiment gauge for June could provide hints about shoppers returning to the streets. It will likely advance after the fall.

Here are the top US events as they appear on the forex calendar: 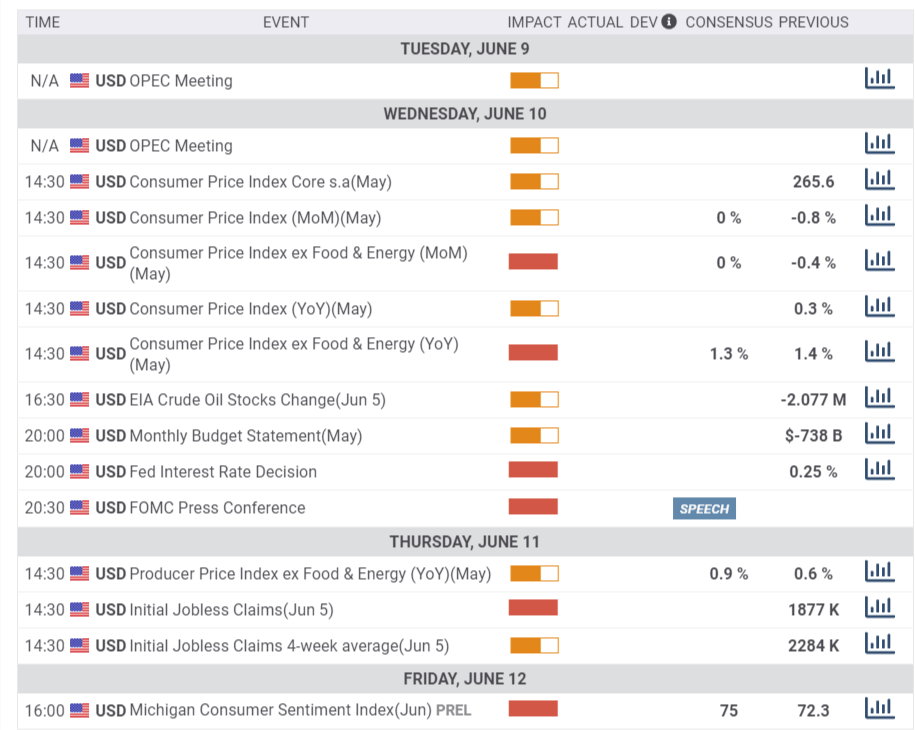 The Aussie is overbought – according to the Relative Strength Index on the daily chart, which is well above 70. That implies a correction. The upside move kicked off after AUD/USD broke above the uptrend channel and topped the 200-day Simple Moving Average. While upside momentum persists, a fall is more likely before rises can resume. 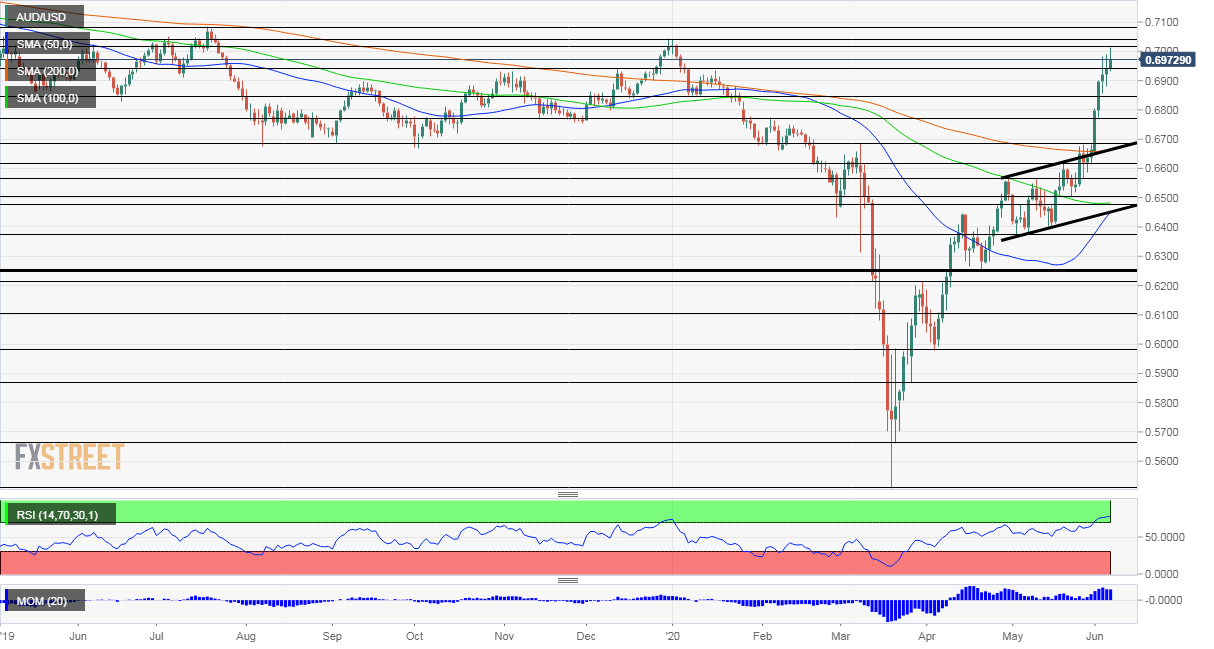 AUD/USD is overstretched on the technical level and the dollar has gone too far to the downside. The Aussie’s genuine reasons to rise may send it higher, but perhaps after a much-needed correction.

The FXStreet Forecast Poll is showing a considerable downward correction. The speed of the rally may have caught experts by surprise. Conversely, they may also see a potential for a counter-move after the substantial rises. 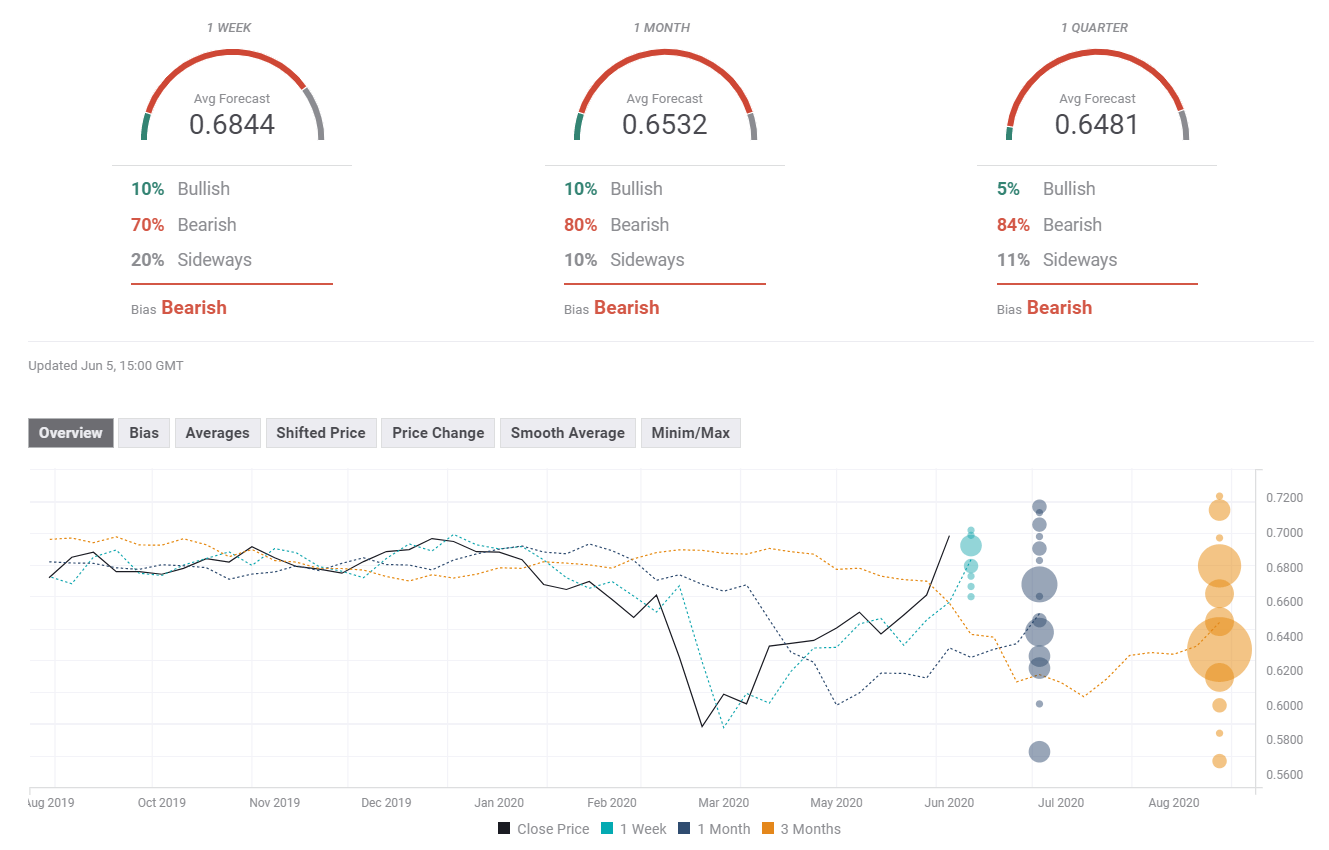