The EUR/USD pair prolonged its positive move for the fourth straight session and shot to three-week tops on Wednesday. The shared currency remained well supported by the Franco-German proposal for a €500 billion European recovery fund. Bulls seemed rather unaffected by Wednesday release of softer-than-expected final Eurozone CPI, which missed the flash estimate and came in at 0.3% for April.

Meanwhile, the emergence of some fresh selling around the US dollar provided an additional boost to the major and remained supportive of the momentum. Despite fading hopes for a potential COVID-19 vaccine and concerns over worsening US-China relations, the upbeat market mood was seen as one of the key factors that undermined the greenback’s perceived safe-haven demand.

The pair rallied back closer to monthly tops, albeit failed near the key 1.1000 psychological mark and witnessed a modest pullback following the release of FOMC meeting minutes, which sent a dovish message about the economic recovery. Minutes for the FOMC meeting held on April 29 also warned that the coronavirus pandemic posed both a severe economic threat and a risk to financial stability.

Nevertheless, the pair ended the day with strong gains but struggled to gain any strong follow-through, instead witnessed a modest pullback during the Asian session on Thursday. A further escalation in disputes between the world’s two largest economies weighed on investors’ sentiment and exerted some pressure on the major. It is worth mentioning that the US Senate passed a bill that could block some Chinese companies from selling shares on the American stock exchanges.

The pair was last seen trading just above mid-1.0900s as market participants now look forward to the flash version of Eurozone PMI prints for May, which will play a key role in driving the market sentiment surrounding the common currency. Later during the early North American session, the US economic docket – featuring the releases of Philly Fed Manufacturing Index, Initial Weekly Jobless Claims and Flash Manufacturing PMI – might influence the USD price dynamics and produce some meaningful trading opportunities.

From a technical perspective, the pair stalled its positive momentum near a resistance marked by the top end of a multi-week-old trading range. Hence, it will be prudent to wait for some strong follow-through buying to confirm a near-term bullish breakout and positioning for any further near-term appreciating move. Any fresh move up might continue to confront some resistance near the 1.1000 mark, which is closely followed by the very important 200-day SMA, around the 1.1015-20 region. A convincing breakthrough the mentioned barrier will be seen as a fresh trigger for bullish traders and set the stage for a move towards reclaiming the 1.1100 round-figure mark with some intermediate resistance near the 1.1040-50 region.

On the flip side, any meaningful pullback is likely to find some support near the 1.0900 mark, which if broken might accelerate the fall towards the 1.0845 horizontal support. Some follow-through selling has the potential to drag the pair back towards the 1.0800 mark ahead of the trading range support, near the 1.0775 region. Failure to defend the mentioned support levels might now turn the pair vulnerable to break below the 1.0700 mark and slide further to retest YTD lows, around the 1.0635 region. 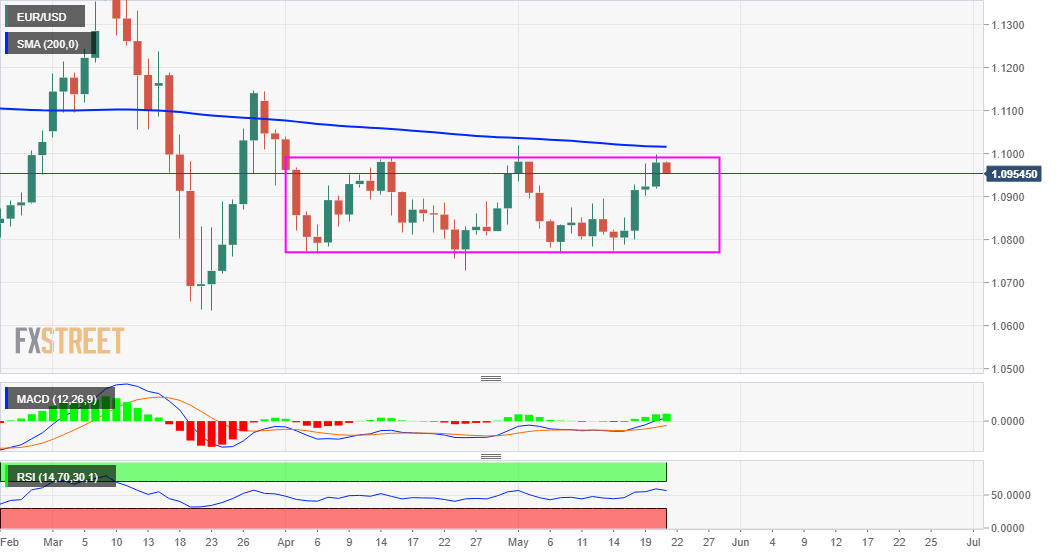