The EUR/USD pair had some good two-way price moves on Thursday and finally settled near the lower end of its daily trading range, snapping four consecutive days of winning streak. The US dollar attracted some safe-haven bids amid worsening US-China relations and exerted some initial downward pressure. The pair did gain some intraday traction and climbed to fresh three-week tops, albeit struggled to find acceptance/build on the momentum beyond the key 1.1000 psychological mark.

Diplomatic tensions between the world’s two largest economies escalated further after Zhang Yesui, speaker for the National People’s Congress (NPC), said that China will firmly defend its interests if the US does things that undermine China’s core interests. Adding to this, the incoming macro data further illustrated the extent of the economic fallout from the coronavirus pandemic. This, in turn, continued underpinning the greenback and prompted some selling around the major.

On the economic data front, the flash version of the Eurozone PMI prints came in to show that activity in both the manufacturing and services sector remained depressed in May. From the US, the Initial Weekly Jobless Claims reports showed that around 2.44 million people applied for unemployment benefits during the week that ended May 16. Separately, the Philly Fed Manufacturing Index fell short of market expectations and improved modestly to -43.1 in May from -56.6 previous.

Bitcoin and Altcoins Price Analysis: BTC Back in Selloff Mode?

The global risk sentiment took a further hit on Friday amid fears that China’s decision to impose new Hong Kong security law would lead to major US-China tussle. The latest developments forced investors to take refuge in the safe-haven dollar, which led to some follow-through selling around the major.
In the absence of any major market-moving economic releases, the broader market risk sentiment and the ECB Monetary Policy Meeting Accounts (minutes) will be looked upon for some meaningful trading opportunities on the last day of the week.

From a technical perspective, the overnight rejection from the vicinity of monthly tops reinforced a multi-week-old trading range. Hence, a subsequent fall below the 1.0900 mark now seems to accelerate the slide further towards the 1.0845 horizontal support. Some follow-through selling has the potential to drag the pair back towards the 1.0800 mark ahead of the trading range support, near the 1.0775 region. Failure to defend the mentioned support levels would turn the pair vulnerable to break below the 1.0700 mark and aim to retest YTD lows, around the 1.0635 region.

On the flip side, a fresh leg up might continue to confront some fresh supply near the 1.0975 region, which is closely followed by the 1.1000 mark and the very important 200-day SMA, around the 1.1015-20 region. A convincing breakthrough might be seen as a fresh trigger for bullish traders and set the stage for a further near-term appreciating move, possibly towards reclaiming the 1.1100 round-figure mark with some intermediate resistance near the 1.1040-50 region. 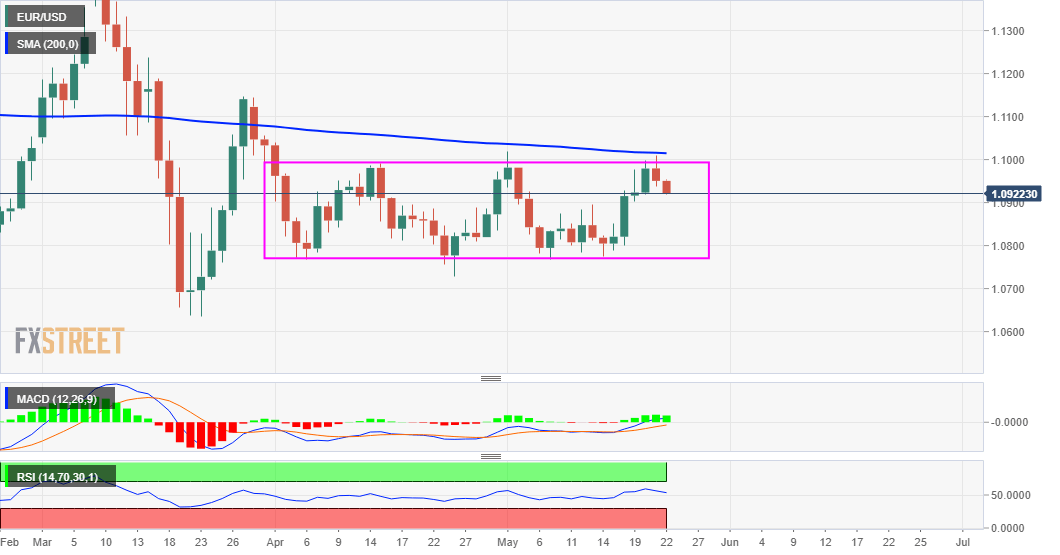