Bad news? No problem – the safe-haven US dollar has been gaining ground as doubts about a coronavirus vaccine increased. The lack of details and nor acknowledgment from the government agency that accompanied the initial trials sent stocks lower and the greenback higher. Clarifications on the Massachusets-based firm’s results will likely move the dollar.

However, EUR/USD only dropped to 1.0920 before bouncing.

The common currency is also shrugging off fears that the Franco-German agreement for a €500 billion fund will run into trouble. A group of four EU hardliners – Austria, the Netherlands, Denmark, and Sweden – is set to publish a rival proposal later in the day.

The “Frugal Four” likely object granting money but rather designating it as loans. Moreover, the “frugal four” may demand to reduce the package, while Italy – the hardest-hit country – expressed its wish to enlarge the sum. Negotiations may drag on for several weeks yet investors are betting that the Berlin-Paris axis will get its way.

The European Central Bank is set to add further stimulus if needed, potentially buying new bonds issued by the European Commission. Several members of the ECB’s Governing Council have reiterated the message.

The US central bank has been in the spotlight in recent days. Jerome Powell, Chairman of the Federal Reserve nudged Senators to provide more fiscal support in his testimony on Tuesday. He also vowed to do whatever is necessary from the monetary side but did not offer new opinions on negative rates.

The world’s most powerful central bank will release its meeting minutes from the rate decision in late April, and sub-zero rates are of high interest. If several officials support setting sub-zero rates, the dollar may plunge, but that seems unlikely.

Another euro-positive development is the encouraging drop in COVID-19 cases and deaths, especially Italy and Spain: 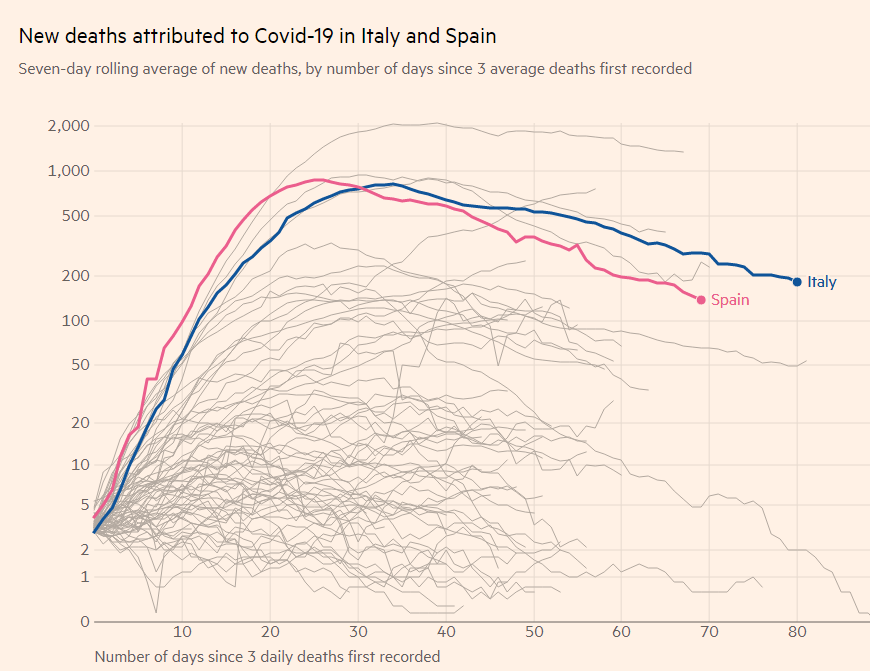 Germany’s estimated virus reproduction rate remains below 1, another positive development as the country opens up. New figures from Spain, Italy, and France are due out later in the day and may move the euro.

Sino-American tensions remain significant, with Hu Xijin, editor of the Global Times – considered a mouthpiece of Beijing – continued criticizing President Donald Trump. Washington continues working on plans to bring supply chains back to America. Without new developments, the dollar has room to retreat.

All in all, there are many factors to consider, with the wind currently blowing in favor of the euro.

Momentum on the four-hour chart remains to the upside, and EUR/USD is trading well above the 50, 100, and 200 Simple Moving Averages. The Relative Strength Index is near 70, flirting with overbought conditions, and that may limit gains.

One more blended US recordsdata put