The EUR/USD pair extended its upside momentum and shot to fresh two-month tops on Friday amid a broad-based US dollar weakness. The optimism over re-opening of economies across the world and hopes of a sharp V-shaped recovery helped offset concerns about heightened tensions over China’s move to tighten control over Hong Kong. This, in turn, undermined the greenback’s relative safe-haven status and turned out to be one of the key factors driving the pair higher.

On the other hand, the shared currency remained well supported by the European Union Commission’s proposed €750 billion coronavirus recovery fund. The bullish momentum seemed rather unaffected by mixed Eurozone consumer inflation figures. According to Eurostat’s flash reading, the headline CPI came in at +0.1% YoY rate in May, hitting the lowest since June 2016 and falling short of market expectations of 0.2%. Meanwhile, the core figures held steady at +0.9% in the reported month as compared to +0.8% expected and +0.9% previous.

The pair rallied to late March swing highs resistance near the 1.1145-50 region, albeit witnessed a modest intraday pullback ahead of the US President Donald Trump’s response to China’s security law for Hong Kong. Nevertheless, the pair still ended in the greenback, around the 1.1100 round-figure mark and regained some positive traction on the first day of a new trading week. Trump announced a series of actions against China and as expected, began the process of ending Hong Kong’s special status. Investors breathed a sigh of relief as Trump did not withdraw from the US-China phase-one trade deal offered a sigh of relief.

This coupled with signs of recovery in the Chinese economy from the coronavirus pandemic remained supportive of the upbeat market mood and continue denting demand for the safe-haven USD. Data released on Sunday showed that China’s manufacturing sector activity slowed a bit in May, though remained in the expansion territory. Apart from this, the buck was further pressured by widespread riots in the US, led by George Floyd’s death at the hands of Minneapolis police. The pair has now moved back closer to Friday’s swing high and in the absence of any major market-moving economic releases from the Eurozone, remains at the mercy of the USD price dynamics.

Moving ahead, market participants will now look forward to a slew of important macro data, scheduled at the beginning of a new month. This, along with the latest ECB monetary policy update on Thursday will assist investors to determine the pair’s next leg of a directional move. A busy week kicks off with the release of the US ISM Manufacturing PMI, which will provide some short-term trading impetus later during the early North American session.

From a technical perspective, bulls on Friday took a breather ahead of a resistance marked by the 61.8% Fibonacci level of the 1.1497-1.0636 downfall. Meanwhile, short-term technical indicators are already flashing or have moved on the verge of breaking into overbought territory. The set-up warrants some caution before placing any aggressive bullish bets. Hence, any subsequent positive move might continue to confront a stiff resistance near mid-1.1100s, which should now act as a key pivotal point for short-term traders. That said, a convincing breakthrough the mentioned barrier now seems to set the stage for a move towards reclaiming the 1.1200 round-figure mark.

USD/JPY Forecast: US employment data can send it to 110.00

On the flip side, the 1.1100 mark now seems to act as immediate support and is closely followed by 50% Fibo. level, around the 1.1075 region. Failure to defend the mentioned support levels might prompt some long-unwinding trade and accelerate the corrective slide further towards the very important 200-day SMA resistance breakpoint, currently near the 1.1020-15 region. 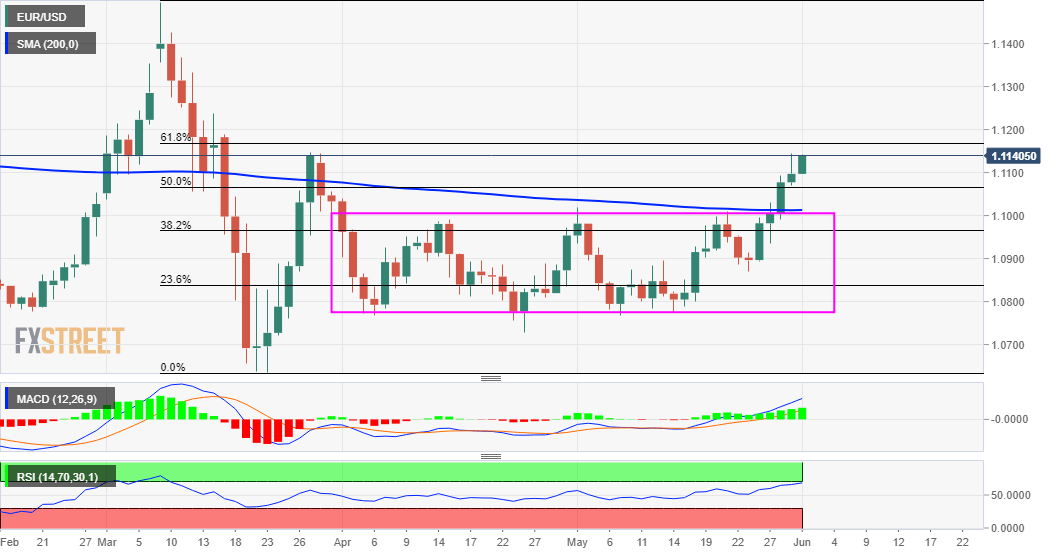