“…it all comes from the top. They could have easily stopped the plague, but they didn’t” – one of President Donald Trump’s tweets accusing China not only responsible for coronavirus but also for a disinformation campaign. The novelty is that the president also points fingers at his counterpart Xi Jinping – whom he used to praise until recently.

Trump’s barrage of tweets has contributed to souring the mood, weighing on stocks, and boosting the safe-haven US dollar. Lawmakers in Washington are also ramping up their efforts to curb Beijing’s influence, with a unanimous vote in the Senate and Democrat-led legislation in the House. The anti-China sentiment is rampant in America, and both parties are heightening their rhetoric ahead of the elections in November.

Another minor downer came from Mitch McConnell, the Senate Majority Leader, who rejects extending the extraordinary unemployment benefits beyond July. The reluctance to further stimulate the economy from the fiscal side – contrary to what the Federal Reserve asks – is also contributing to the reversal.

The change in sentiment cut off the EUR/USD’s rally, which sent the world’s most popular currency pair to nearly 1.10 on Wednesday – a two-week high. The greenback was previously sold off on the back of the Fed’s commitment to continue loosening. The meeting minutes from the latest rate decision reiterated this message. Officials at the bank explored ways to enhance forward guidance and did not mention negative interest rates.

The euro previously shrugged off efforts by the “Frugal Four” – Austria, Denmark, the Netherlands, and Sweden – to halt the Franco-German plan. According to the agreement between the continent’s largest countries, the EU budget would be expanded by €500 billion to support pandemic relief efforts. Investors seem to bet that the Berlin-Paris axis will get its way, after years of dysfunction.

Coronavirus statistics continue declining in both Europe and the US, yet fears of a new wave remain significant, especially as surges in infections are seen in other places.

Further details from Moderna – which announced achievements in development a coronavirus vaccine – are still awaited. Other cures and immunization efforts are underway.

Markit’s preliminary Purchasing Managers’ Indexes for May are set to show a bounce in services sector reads, which have reached record lows in April. The gradual reopening of the economies is boosting sentiment, albeit from low levels. Expectations for the manufacturing sectors are mixed. All figures will likely remain far below the 50-point threshold separating expansion from contraction.

Weekly Unemployment Claims are projected to show another week of declines from, yet another multi-million read. The figures are for the week ending on May 15, when the Non-Farm Payrolls surveys are held.

US Initial Jobless Claims: Will there be a hiring surge?

Markit’s flash US PMIs are set to show a similar bounce to that seen in Europe, yet sub-40 figures are projected.

Markit PMI Preview: Is the bottom in?

Economists expect Existing Home Sales statistics for April to show a plunge from 5.27 million annualized recorded in March. Contrary to other indicators, this one will show the effect of coronavirus for the first time. 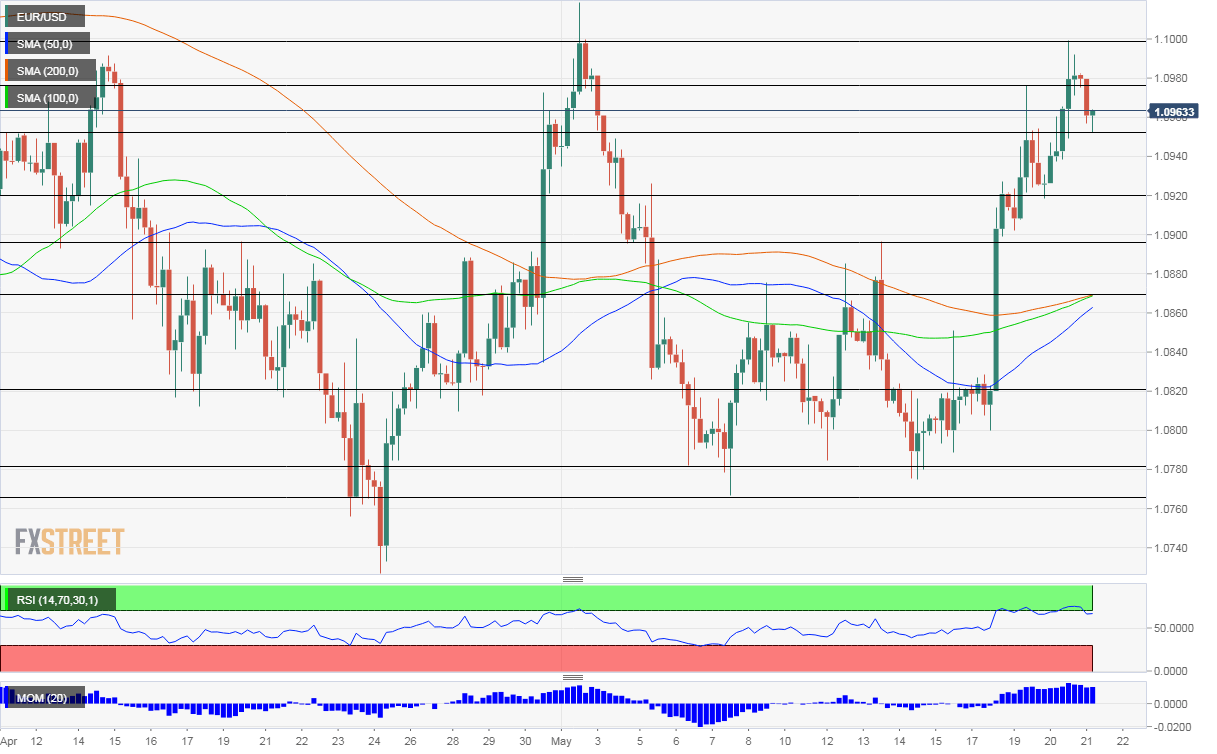 The Relative Strength Index on the four-hour chart has dropped below 70, exiting overbought conditions. That is a bullish sign that joins upside momentum. EUR/USD is trading above the 50, 100, and 200 Simple Moving Averages. All in all, bulls are in control.