The pub is still closed  – the UK’s lockdown is only being partially eased, and relatively robust growth figures failed to help the pound. Investor disappointment from the Federal Reserve’s refusal to set negative rates boosted the dollar. Four high-level British publications, another view on the Federal Reserve’s thinking and coronavirus figures, are all eyed.

This week in GBP/USD: Ongoing UK lockdown, no negative rates.

The good news is that the British economy squeezed by “only” 2% in the first quarter – above the crisis worst. However, everybody knows that the April-June period is worse – especially as the UK’s lockdown continues mostly unchanged.

Despite improving COVID-19 statistics, Prime Minister Boris Johnson announced only minor tweaks to what Brits can and cannot do, sending a message full of conditionality and some confusion. More significant loosening is due only in June and then in July.

As the shuttering continues, the government also offered more financial help, extending the furlough scheme through October, causing the government’s deficits to balloon, with some estimating it will top £300 billion.

Economic calculations could be further complicated if the UK leaves the Brexit transition period without a trade deal. Both Chief EU Negotiator Michel Barnier and his British counterpart David Frost acknowledged stark differences on the “level playing field” topic. Brussels wants Britain to align regulation with the EU, and London refuses. Their statements temporarily sent GBP/USD to the lowest since March.

How will Chancellor of the Exchequer Rishi Sunak fill the public coffers? Andrew Bailey, Governor of the Bank of England, immediately offered help, by reiterating that expanding the bond-buying scheme is on the cards. He went further by saying the BOE is ready to help the government’s finances – causing some to worry about direct debt monetization.

Bailey did reject another monetary tool – negative interest rates. Sub-zero borrowing costs have hurt banks’ profits and did little to boost growth and inflation prospects in Japan and the eurozone. Bailey shared his message with a colleague across the pond, and that did not go down well in markets.

Jerome Powell, Chairman of the Federal Reserve, vowed to continue supporting the US economy but said he and his colleagues are “not looking at” negative rates. That fell short of bond market pricing of such a move, resulting in softer stocks and a stronger dollar. It also fell foul with President Donald Trump, who urged the Fed to provide that “gift.”

The occupant of the White House also boosted the greenback by directly advocating a stronger dollar. He also kept the safe-haven currency bid by intensifying the war of words with China. He stated that if China may try to achieve a vaccine before the US but that he has “ways to stop them.”

Similar to the UK, US COVID-19 statistics are improving, especially in hard-hit New York, yet the world’s largest economy is still not out of the woods, with new flare-ups. Anthony Fauci, the leading doctor in the White House’s coronavirus taskforce, told a Senate committee that reopening the economy too quickly would cause unnecessary deaths and suffering. Trump responded angrily by saying that it is unacceptable.

US retail sales crashed by 16.4% in April, with the Control Group tumbling by over 15%, triple the expectations. The dismal American consumption – the center of its economy – weighed on sentiment.

How fast will the UK economy return to normal? That heavily depends on new COVID-19 statistics. An ongoing improvement would allow Johnson to move forward with further easing and boost the pound.

Officials at the BOE may also stir sterling by hinting about the next moves. The reaction would be mixed – more monetary stimulus would allow for additional spending to relieve the economy, but also indicate a dire situation and devalue the currency.

Investors will also continue following Brexit talks, as the clock ticks down to June – the deadline for both sides to agree on a deal, extending the transition period beyond year-end, or to accept a no-trade-deal Brexit. Further acrimony could send sterling down.

The economic calendar is packed with evidence about what happened to the economy so far. The Unemployment Rate and Average Earnings figures for March will likely be shrugged off by investors, as they would capture only the beginning of the lockdown.

However, the Claimant Count Change, or jobless claims statistics, are already for April. Economists expect a modest increase of only 9,400 people, probably reflecting the government’s furlough scheme – keeping people at work while they are not receiving pay. However, the figure may also jump substantially. Britain was shuttered throughout last month.

Aussie Recovery And Suspicious Weakening Of The Franc

Inflation is also projected to remain stable in April, yet evidence from the US and the eurozone suggests a drop in prices. A substantial crash, partially due to energy prices, may nudge the BOE to act sooner, especially if the headline Consumer Price Index falls below 1% yearly, the bottom of the bank’s range.

Markit’s preliminary Purchasing Managers’ Indexes for May are set to show an ongoing depression, especially in the services sector. However, the recent announcement of a modest reopening may result in a rebound of sorts. Any score below 50 represents contraction.

Last but not least, retail sales statistics for April will show how a full month of lockdown shaped Brits’ spending habits. Expenditure dropped by 5.1% in March, a figure influenced by stockpiling ahead of hunkering down. A considerable downfall is on the cards now.

Here is the list of UK events from the FXStreet calendar: 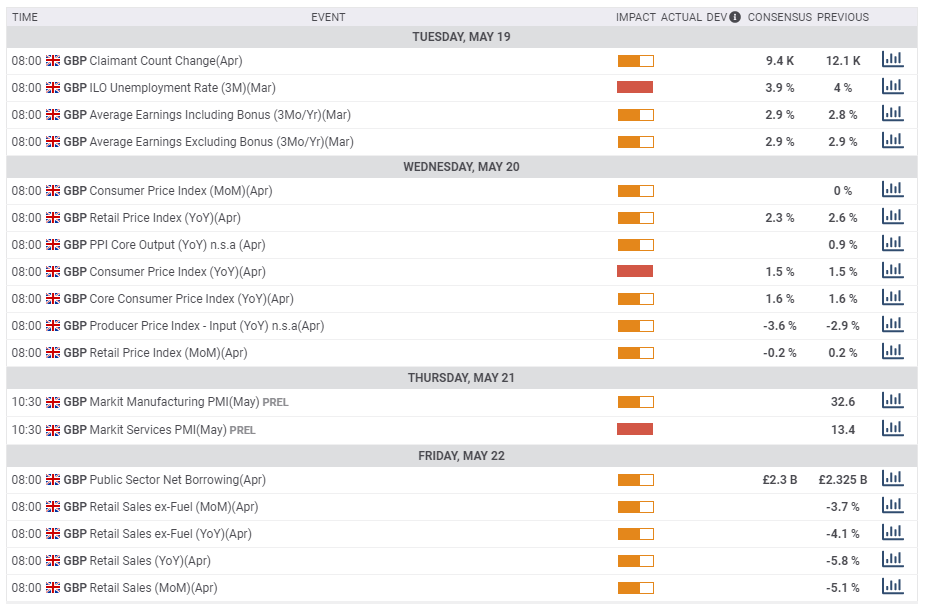 US events: Health vs. economics, Fed minutes, and more

President Trump will likely continue pushing governors to keep loosening the shelter-in-place orders. Some have already done so, with or without experts’ blessing. The safe-haven dollar has room to rise if COVID-19 figures turn back up, a result of early openings. On the other hand, reopening alongside falling statistics will likely weigh on the greenback.

Sino-American tensions remain in the spotlight after Trump’s recent accusations and similar saber-rattling from Beijing, and especially from the English-language outlet, the Global Times. Positive comments on the implementation of the trade deal would pressure the dollar while further heightened rhetoric could keep its bid.

Housing figures for April will likely show a free-fall in economic activity, providing additional information to digest ahead of a testimony Fed Chair Powell and Treasury Secretary Steven Mnuchin on Tuesday. Efforts to provide relief and prospects of recovery will be in the spotlight, as well as going negative on rates.

The minutes of the Federal Open Committee’s Meeting (FOMC Minutes) will also shed light on the bank’s thinking. Traders will look for any hints about sub-zero borrowing costs – rejected by Powell – and further bond-buying, which is more likely. Comments about the damage and the shape of the bounce, two unknowns that everybody is grappling with, are set to move markets.

Thursday’s weekly jobless claims are for the week that ended on May 15 – when the Non-Farm Payrolls surveys are held. Continued declines would be welcomed, yet multi-million statistics could continue weighing on markets and supporting the greenback. Markit’s preliminary PMIs for May could show a small improvement, yet held back well below 50.

Here the upcoming top US events this week:

Pound/dollar has dropped below the uptrend support line that accompanied it since mid-April and also fell below the 50-day Simple Moving Average. It hit 1.2165, April’s trough – creating a critical double-bottom. At the time of writing, this level is being breached in choppy price action. Momentum has turned to the downside and defending that line is becoming harder. 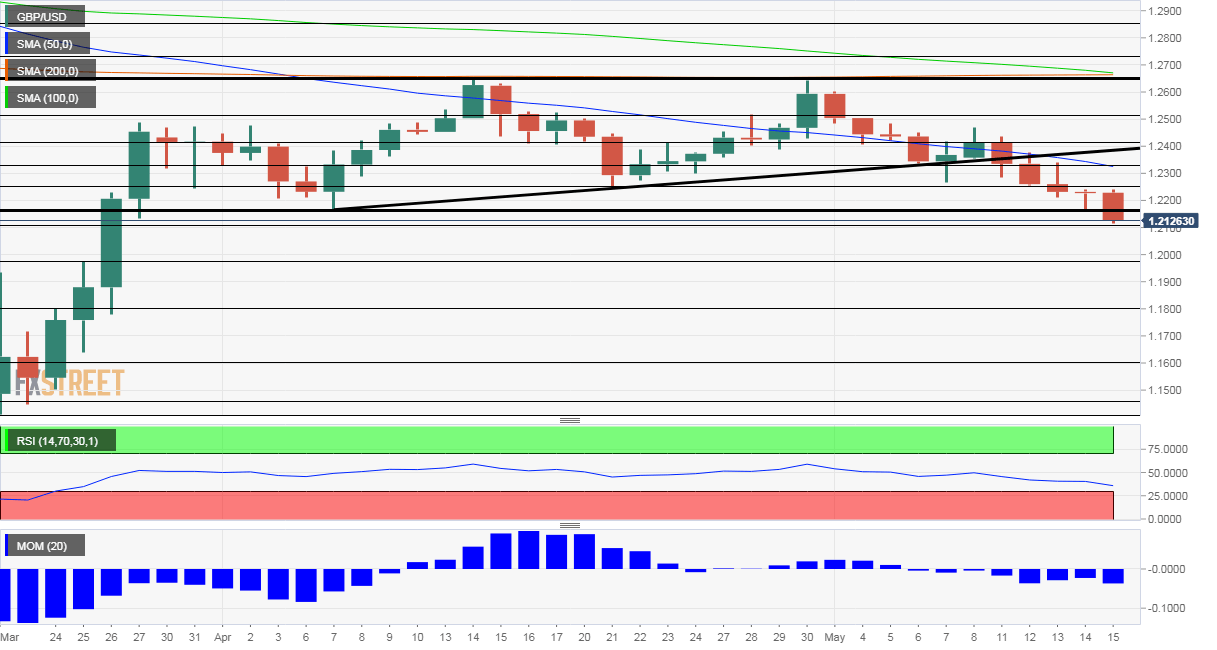 The ongoing lockdown, unimpressive UK data, global gloom, and a potential break of the double-bottom could also trigger a significant sell-off.

The FXStreet Forecast Poll is showing bearish bias in the short term but a bounce later on. Average targets have fallen, but the adjustments have been moderate in comparison to the fall in the cable. 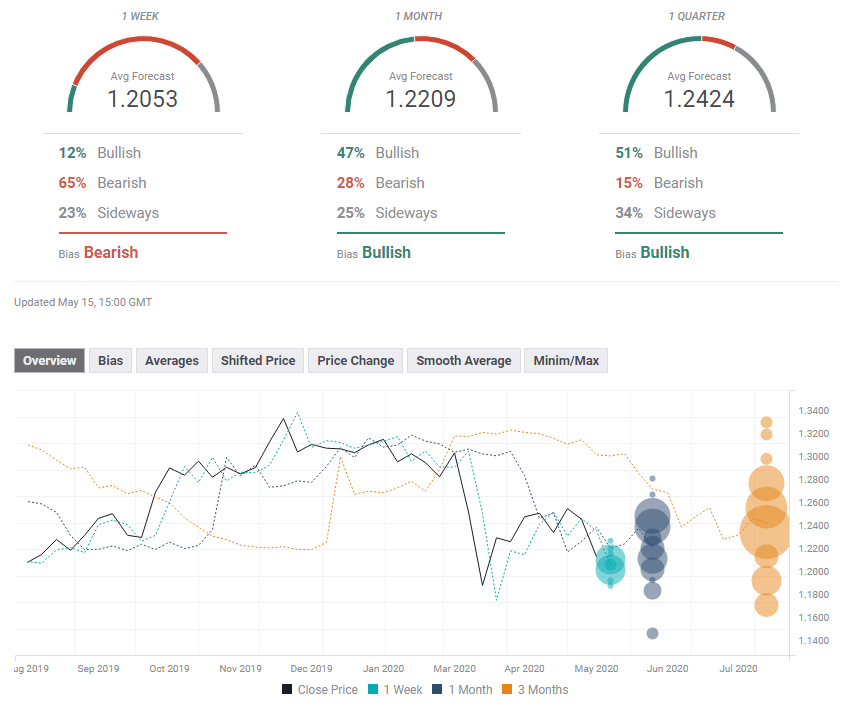