A breather before next move up? Not so fast, especially with Brexit breathing down the pound’s neck.GBP/USD has been edging lower as the safe-haven US dollar regained some ground. While the greenback may be ready to retreat once again, the pound’s position may limit any gains and perhaps suggest falls.

Markets rallied on Monday – diminishing demand for the dollar – amid hopes for a coronavirus vaccine. Massachusets-based Moderna announced positive results among eight patients and inspired investors. However, as time passed by, the lack of any details that scientists could scrutinize – nor any acknowledgment from government bodies involved in the project – caused doubts, that sent the dollar back up and equities lower.

While shares have found their feet and the greenback is giving ground again, sterling may still stumble due to UK-related reasons:

1) Daily COVID-19 deaths are on the rise once again, jumping to 545 in Tuesday’s report. The weekend effect – in which statistics are relatively rosy for Saturdays and Sundays, is pronounced in Britain and the setback on workdays is substantial. Total coronavirus mortalities have topped 35,000 with the focus on care homes.

The ongoing misery limits the government’s ability to lift the lockdown, weighing on the economy. Chancellor of the Exchequer Rishi Sunak painted a gloomy picture of the economy, saying the UK is facing a recession “the likes of which have never been seen.”

Chart Art: Retracement and Reversal Setups on GBP/JPY and AUD/CAD

2) Brexit talks getting nasty: David Frost, London’s Chief Negotiator, said that the EU is treating the UK as an “unworthy partner” trying to bend it to EU norms, offering a low-quality deal. He described Brussels’ proposals as “egregious” when referring to having EU state rules as part of British law. His counterpart Michel Barnier blamed Britain for wanting to keep the benefits of a member state without the obligations.

The ongoing tensions raise the chance that the UK exits the transition period without a trade deal, reverting to World Trade Organization rules, worrying investors.

Andrew Bailey, Governor of the Bank of England, will speak to lawmakers later in the day and may refer to the topic. While he previously sounded skeptical about such a move, several of his colleagues have been open to the idea. That could weigh on the pound as well.

Money markets are raising their bets on the BOE taking that path.

Traders are also speculating on negative rates in the US. Jerome Powell, Chairman of the Federal Reserve, recently rejected setting sub-zero borrowing costs, The bank’s meeting minutes are eyed. Powell vowed to support the economy and nudged elected officials to add fiscal stimulus in a testimony on Tuesday.

Sino-American relations remain tense, but not as much as beforehand. 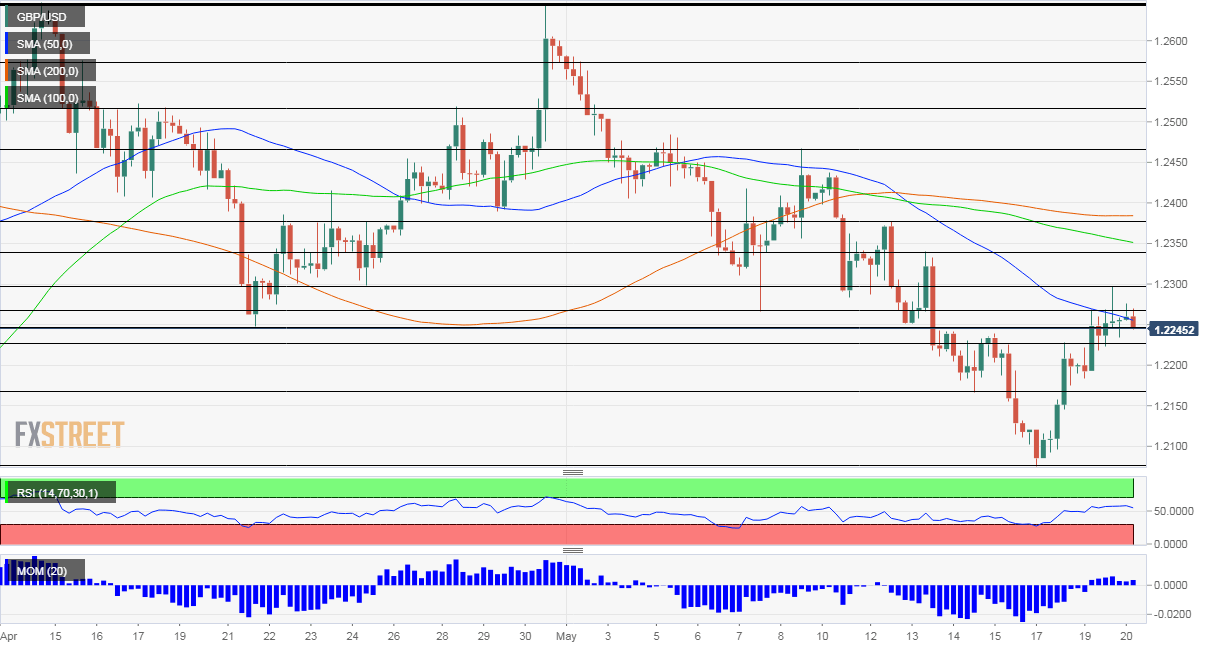 Pound/dollar has failed in its attempt to top the 50 Simple Moving Average on the four-hour chart, but momentum remains to the upside. The picture is mixed.